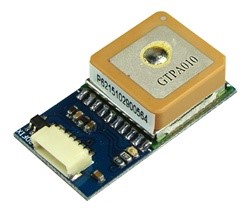 GPS is examined in two parts. GPS receiver is the first part of it. It provides to take GPS signal from the satellite and send the information from its serial port. Its internal serial port sends the data through tx port. The data is sent via NMEA format so that it is needed to decode the NMEA format. After that in second part, in order to decode the signal NMEA format is introduced.

In the project, the MediaTek MT3329 GPS module is used. It can be seen in figure 1. The MediaTek-3329 is an ultra-compact POT (Patch on Top) GPS Module. This POT GPS receiver provides a solution that is also high in position and speed accuracy performances, with high sensitivity and tracking capabilities in urban conditions.  The module can support up to  66  channels and is designed for a small-form-factor device.

The block diagram of MT3329 is illustrated in figure 2. As it can be seen from the figure there are ten ports which provides the exact communication between GPS module and user. The detailed information about the I/O pins is explained in the following table1:

GPS receiver communication is defined within this specification. Most computer programs that provide real-time position information understand and expect data to be in NMEA format. This data includes the complete PVT (position, velocity, time) solution computed by the GPS receiver. The idea of NMEA is to send a line of data called a sentence that is totally self-contained and independent from other sentences. There are standard sentences for each device category and there is also the ability to define proprietary sentences for use by the individual company.

All of the standard sentences have a two letter prefix that defines the device that uses that sentence type. (For GPS receivers the prefix is GP.) which is followed by a three-letter sequence that defines the sentence contents. In addition NMEA permits hardware manufactures to define their own proprietary sentences for whatever purpose they see fit. All proprietary sentences begin with the letter P and are followed with 3 letters that identify the manufacturer controlling that sentence. For example, a Garmin sentence would start with PGRM and Magellan would begin with PMGN.

An important message in order to keep communication is shown below.

In this sentence $GPRMC represent one of the 19 interpreted sentences and it is protocol header. RMC stands for Recommended Minimum Specific GPS/Tracking Data in GPRMC.  064951.000 indicates real-time in HH.MM.SS.SSS. Namely, the exact time is 06:49:51.000. A means data is valid. If this data is not valid data A replace with V which indicates that data is not valid. 2307.1256 shows the latitude information in DD.MM.MMM format. Next, N indicates North which also could be S for the south.

Similarly, 12016.4438 shows longitude and E for East. E also could be replaced with W for West. 0.03 indicates the speed over the ground in knots. 165.48 shows the course value over the ground in degree. 260406 shows the date on which day information is sent. 3.05, W shows the magnetic variation in degree but it should be noted that this needs the customization service. The mode of the message is represented by a letter of A. A stands for automatic D for differential, E for estimated. *2C is the checksum. Checksum always starts with a star before it. To sum up, we can decode the information like table 2:

Bosch’s BMP085 is a rock-solid barometric pressure sensor. It features a measuring range of anywhere between 30,000 and 110,000 Pa. ‘Pa’ meaning the Pascal unit, which you’ll probably more often see converted to hPa (hectoPascal), equal to 100 Pa, or kPa (kiloPascal), which is 1000 Pa. As a bonus, the BMP085 also provides a temperature measurement, anywhere from 0 to 65°C

The BMP085 has a digital interface, I2C to be specific. This means there may is a bit more overhead to get it talking to a microcontroller, but in return, data is returned that is much less susceptible to noise and other factors that may hamper an analog signal. I2C is a synchronous two-wire interface, the first wire, SDA, transmits data, while a second wire, SCL, transmits a clock, which is used to keep track of the data. If Arduino is used to talk to the BMP085, the Wire library will conveniently take care of most of the work in communicating with the sensor.

The BMP085 have some advantages which are given in below .

The BMP085 have some disadvantages which are given in below.